THE ORIGIN OF THE CLUB 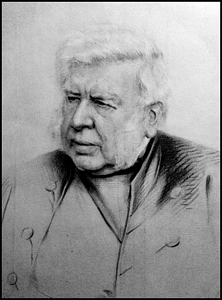 On Saturday, 19 March 1859, Walter Farquhar Hook, Doctor of Divinity, was installed as Dean of Chichester in
succession to Dr. George Chandler. The Hooks came to Chichester at the end of July and lived, until 19 April 1860, in a house in South Street while the Deanery was under repair. On Thursday, 21 February 1861, the spire of Chichester cathedral, after many anxious weeks, ‘was seen to incline slightly to the southwest, and then to descend perpendicularly into the church as one telescope tube slides into another, the mass of the tower crumbling beneath it’. From that date the new Dean’s boundless energies were employed in raising the minimum £50,000 which Sir Gilbert Scott estimated would be needed to repair the damage and rebuild the spire. As it was not until November 1867 that the cathedral was reopened, there were large numbers of workmen engaged on the fabric for over six years: they had already been dealing with the general scheme of restoration since 1859. To provide some place where these and other workmen could enjoy social intercourse elsewhere than in the numerous public houses of Chichester, Dean Hook established the Chichester Working Men’s Club and Institute in premises in the North Pallant in 1863.

There is considerable doubt as to the size of the Club premises in those early days, but it was probably only one room until 1875. The site, measuring 76 ft. 7 in. on the Pallant frontage, was originally occupied by two tenements held on lease from the Dean and Chapter of Chichester, but in 1865 the freehold of the northernmost of the two houses was conveyed to Edward William Johnson (the Chapter Clerk) whose executors sold it for £650 to the trustees of the Working Men’s Club on 2 January 1875; the trustees immediately raised a mortgage on the premises. The southern of the two houses was occupied by Leonard Buckle, M.D., and the northern one by Edmund Peachey. There is no record of when alterations were made to the Club premises or to those adjoining, and communicating with, on the south; neither is there any evidence to indicate that the foundation of the Club was due other than to the personal enterprise of Dean Hook. It is worth noting, however, that in May 1864 the Dean and Chapter agreed to subscribe £5 annually to what was described as the ‘Working mens reading Room in Chichester until further notice.

Everything seems to point to a single room being made available as a reading room: it must be remembered that Public Libraries in the sense that we know them did not exist in small towns like Chichester a century ago. From these modest beginnings and probably not until after 1875, developed facilities for billiards and similar recreations.

Between 1863 and 1897, the day to day history of the Club is unknown because all the records perished when the assistant secretary’s premises were destroyed by fire, but at some date between 1879 and 1897 the title of the Club was changed to that by which it is now known The Chichester City Club. It does not appear to have been in any way a rival to the Chichester Literary and Philosophical Society and Mechanics’ Institute for their functions were different: the Mechanics’ Institute and its museum provided educational facilities while the Working Men’s Club was essentially recreational. Both were staunchly supported by the Dean and Chapter and other clergy; both played important roles in the social life of Chichester; the history of both of them contribute to a more intimate understanding of conditions in a small town before the changes wrought by the wireless, television, easy forms of transport and a more general higher standard of living.

From a book of rules surviving from this date we learn that the president was John Russell Walker, Archdeacon of Chichester; he was supported by thirteen vice-presidents and trustees all of whom were men of some position in the city, a committee of twelve, a treasurer, two secretaries and a custodian. Each candidate for admission was elected by ballot and paid an entrance fee of Is. and an annual subscription of 6s.; “honorary members” paid from 10s. upwards. There were facilities for reading newspapers and periodicals and for playing games from 10 a.m. to 11 p.m. (Sundays excepted); gambling, dogs and intoxicants were prohibited; the use of bad language, offensive behaviour to another member, and the wilful infringement of any of the rules could lead to expulsion. On this sensible and simple basis the fortunes of the Club have rested with only such changes as have been approved by the members to accord with prevailing social conditions and their own requirements.

Many of the records of the early years of the Club have been lost, limiting our knowledge of the origins. However, the picture changes after 1897 and Francis W. Steer, writer of the booklet The City Club, Chichester, states in regard of the records that have survived since that time that he cannot remember having at his disposal a better kept set of minute books.

The records show that after 1900 circumstances began to change, finance becoming an area of concern (no change there, then!) and also the selling of alcohol, which brought changes to the opening hours of the Club. Sunday evening opening hours (except for the billiard room and the card room) were introduced from March 1921 until October 1948. All of these changes of course had to be agreed by the Committee of the day. From 1949 onwards various attempts were made to open membership of the Club to ladies, but this was not actually achieved until 1961, when ladies became entitled to Associate Membership, though they were only entitled to use the front bar (now called the Pallant Bar). The Cathedral Bar and the Billiard Room remained out of bounds to ladies until 2003, the year in which the rules were changed to allow ladies to become Full Members of the Club.

The records show that some initiatives that were started, from headed Club notepaper to the introduction of a post box, were soon abandoned on grounds of cost (another post office closure!). There are also occasions when, in accordance with the rules of the Club, members incurred the wrath of the Committee and were disciplined for failure to conduct themselves in the required manner. The Committee met monthly, as they still do today; it’s nice to know that many of the rules that were in place then are still in force today.

Billiards was a popular pastime and, so far as we know, has always been played in the back room. Fines were imposed for any damage done to the tables! The tradition of a monthly flyer handicap of Billiards was started many years ago, and continues today on the first Wednesday of each month. Handicap matches, with prizes, were also held, the first prize being 30 shillings and the second prize a pair of trousers (what size they picked we don’t know), the third prize being an umbrella. However, the clocks presented by Charlie Howard for the billiard handicaps from 1913 eclipsed all such prizes. Other popular activities included card games and whist, though whist eventually became out of fashion and cribbage took its place. Today there is still a cribbage team that plays in the League, and other sports that are played today include snooker, billiards, darts and golf.

During the 1914-1918 war the Club helped by collecting for war charities, giving comfort to the troops. Wounded soldiers were offered Honorary Membership. A memorial clock, recording the names of Club Members who gave their lives in the Great War, was unveiled in the presence of the Mayor of Chichester at 11 am on 11th November 1919, and is still on display in the Club today.

In 1954 the minutes show that the Club’s finances were in a precarious state. Membership levels had fallen and there was difficulty-collecting subscriptions from some of those whose names remained on the membership list. To improve the Club, attempts were made to decorate it, the Stewards at that time helping to do the work in order to save the Club money. By 1958 there was difficulty-finding people willing to fill the vacant posts for Officers of the Club. However, three years later a decisive and energetic Committee took a very bold course of action, borrowing a large sum of money to convert the Reading Room and Morning Bar into a Lounge for the ladies. Shock treatment was used – a subscription of 2 guineas a year was fixed for City members; this had a tonic effect and the Club was saved.

The Committee today always need to be equally alert to adapt to the times to ensure that the Club remains open and continues to prosper. The Committee are always ready to listen to members’ views and to act on ideas that could improve the Club for everyone. To have a Club that has a friendly and safe atmosphere for both male and female members is imperative.

More recent changes have included the extension added in 1982 to create the present dining and entertainment area. A plaque on the wall reads To commemorate the opening of the extension by the Very Reverend R T Holtby, Dean of Chichester, on September 25th 1982. This part of the Club was formerly a little garden, which Members had to cross to go to the outside toilets (so we have improved somewhat!).

The Club premises at one time originally comprised two houses, now (as is common in many shop conversions in Chichester) knocked into one. When entering the Club you will go first into the original part of the building (now known as the Pallant Bar). The extension is at the far end of the Bar. To its right is the Cathedral Bar (extended out from the second house) where there are the newspapers and the television. Leading off from the Cathedral Bar is the door to the Billiard Room.

This is only a brief account of the history of the Club; if you wish to know more the book by Francis Steer (mentioned at the beginning of this article) is available on loan from the Chichester Library. Parts of the book have been used in this website, and the Club is also indebted to historian and former member Dave Turner, who collected archive material and put together a history of the Club which you can find on the table at the back of the Cathedral bar near the Billiard room.

We have the Dean of Chichester, Walter Farquhar Hook, to thank for the foundation of the Club in 1859. Today we have in-house entertainment and many activities taking place on weeknights as well as at weekends, in addition to sports from golf to cribbage. For information on these events please visit the rest of this website, clicking on the particular tab, or come and have a look around the Club to see for yourself. The members of the Committee like to think that we have a friendly and welcoming atmosphere. Why not come and join us at The Chichester City Club?